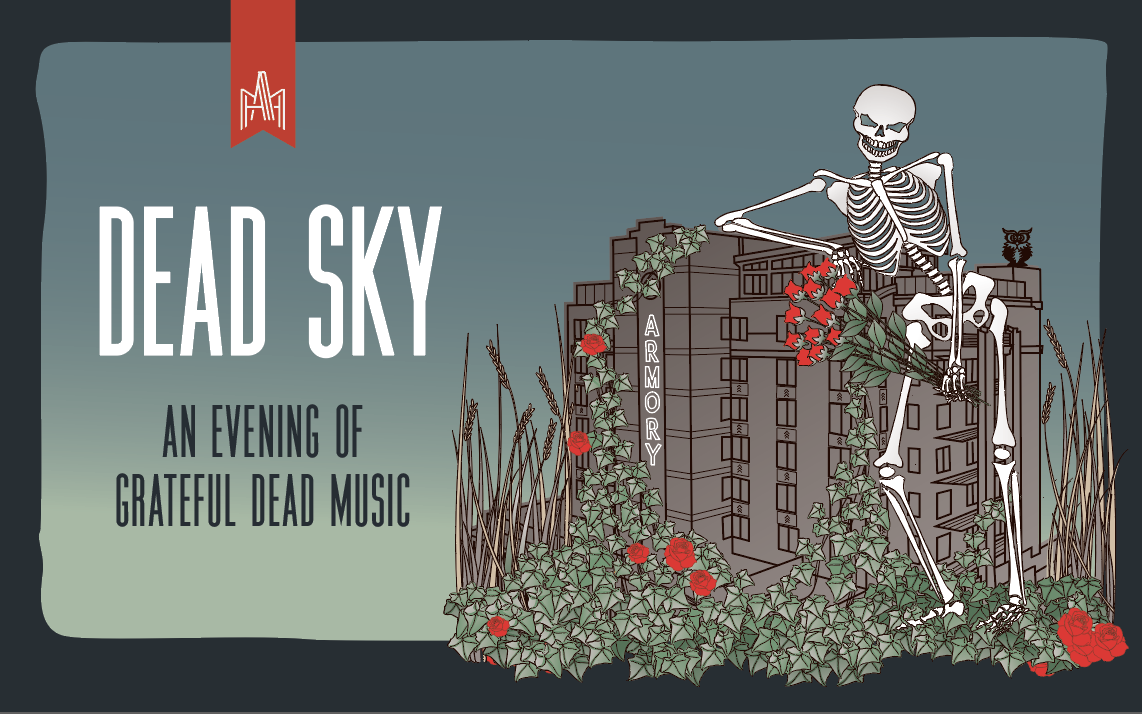 An Evening of Grateful Dead Music

An Evening of Grateful Dead Music

with The Dead Sky

Built on a passion for the legacy of the Grateful Dead and their unforgettable live performances.

The Dead Sky is made up of some of Montana’s most seasoned musicians and features many familiar faces from the Bozeman music scene. This 6 piece Bozeman band is comprised of 3 vocalists, 2 guitarists, bass, drums and keys who have been playing Grateful Dead tunes together since their 1st show at The Filling Station November 1st, of 2019. These musicians have played together in a variety of local acts for many years; including Pinky and the Floyd, M.O.T.H., Kelly Nicholson Band, Tsunami Funk and the Hooligans. They have established a successful following and have organically grown into one of Bozeman’s most cherished tribute bands selling out shows for eager deadheads across the age spectrum.

“From our first show at the Filling Station for the Day of the Dead celebration to our most recent shows, we’ve been improving and having a blast. It wasn’t so much recognizing a need in the market but more of a natural evolution of a bunch of friends that love playing Grateful Dead music together." Luke Flansberg - Lead Vocals/Guitar

You won't want to miss out!

THE INSPIRATION - THE GRATEFUL DEAD

The Grateful Dead... performed approximately 2300 concerts during their 30 years on the road and one concert, in Montana in 1974. Renowned for their incendiary live concerts, with set lists that changed for every show, the lifestyle in Montana lines up perfectly with the music and culture surrounding the Dead Sky. Being a ski town and an outdoor hub has attracted a lot of deadheads to Montana and between Bozeman and Missoula there is a consistent desire for Dead music.

The band was formed (under a different name) in 1965 in Northern California in the city of Palo Alto. Blending rock, folk, country, jazz, bluegrass, blues, and more genres, the band’s brand of psychedelic music has become the stuff that legend is made of—especially via the band’s live shows, which often include lengthy jams that could last 10, 20, 30 or more minutes.

Today, the band’s fans are known as “Deadheads,” both for their appreciation of the band and for their penchant to trip out with psychedelic drugs.

Born in the Bay Area, where counterculture in America was taking off in the 1960s, the band’s founding members include lead guitarist and vocalist Jerry Garcia, rhythm guitarist Bob Weir, keyboardist Ron McKernan, bassist Phil Lesh, and drummer Bill Kreutzmann. Together, they created a group that will live in infamy.

Originally, the band was known as the Warlocks. Members of that early outfit had played together in various San Francisco groups, including the traditional jug band Mother McCree’s Uptown Jug Champions. Lesh was the final member to join the Warlocks before the group changed its name officially to the Grateful Dead.

The band’s first show was at Magoo’s Pizza Parlor, which was located at 639 Santa Cruz Avenue in suburban Menlo Park. It took place on May 5, 1965. The location is now a furniture store.

The band continued its gigs, playing bar shows like Frenchy’s Bikini-A-Go-Go. They also played a regular gig that included five sets a night, five nights a week for six weeks at the In Room in Belmont.

The band ended up changing its name from The Warlocks after finding out that another group was known by that same moniker. In addition, The Velvet Underground had also been known as The Warlocks but had to change its name for the same reason.

According to legend, that name was chosen from a dictionary. Said Lesh, “[Jerry Garcia] picked up an old Britannica World Language Dictionary … [and] … In that silvery elf-voice he said to me, ‘Hey, man, how about the Grateful Dead?”

The definition of the moniker was “the soul of a dead person, or his angel, showing gratitude to someone who, as an act of charity, arranged their burial.”

The term “grateful dead” also appears in a number of folktales from various cultures.

The Grateful Dead’s first show was in San Jose on December 4, 1965, at one of Ken Kesey’s Acid Tests. Kesey was an author and psychedelic drug proponent.

While some early demo tapes have survived, the first of some 2,000 concerts known to have been recorded by the band’s fans came from a gig at the Fillmore Auditorium in San Francisco on January 8, 1966. And later that month, the group played at the Trips Festival, which was a three-day psychedelic rock weekend party produced by Kesey and others. Hippies unite!

In 2015, the four surviving band members marked the group’s 50th anniversary in a series of shows that were billed as their last performances together. Since then there have been other groups born from those players, including Dead & Company, Further, the Rhythm Devils, Phil Lesh and Friends, and more.