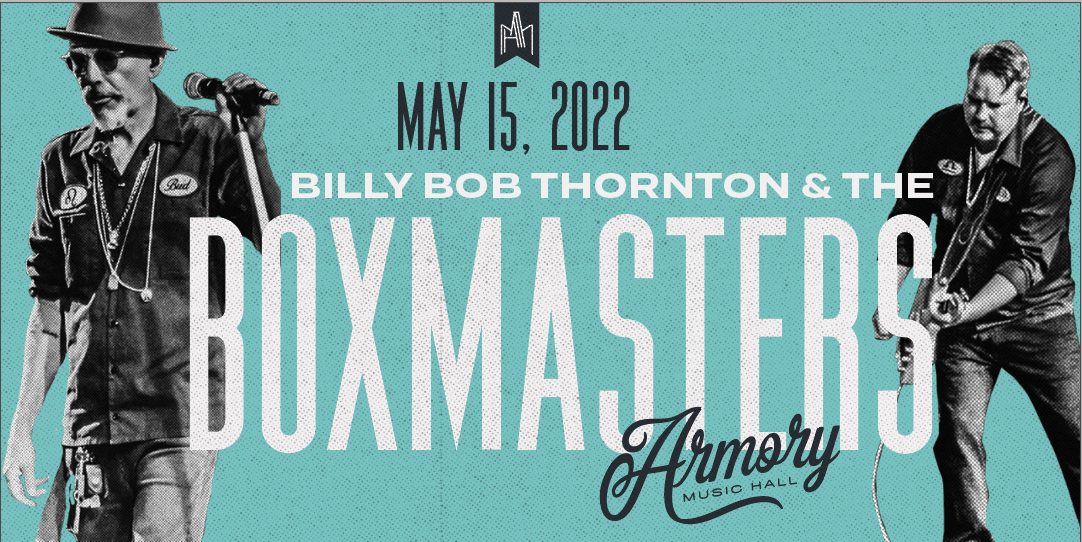 A performance to benefit Musicares

“The Boxmasters capture simplicity that depicts early rock and roll like Buddy Holly and Bill Haley, only a couple steps away from their country influences, while telling stories about our lives today." Tony Braunagel

"Thornton is most famous for his film and television performances, but he’s also a dedicated singer-songwriter, and one of the few actor-musicians who succeeds in both fields.  For nearly a decade, he’s fronted the Boxmasters and turned out rootsy Americana and sixties-style rockabilly." The New Yorker

In addition to being one of our nation’s most acclaimed actors, Bud (Billy Bob) Thornton is also recognized for his musical talents. He has recorded for solo albums: Private Radio, Edge Of The World, Hobo and Beautiful Door. He has also appeared on numerous recordings by other artists, including Warren Zevon’s Grammy winning album The Wind, the legendary Earl Scruggs’ Earl Scruggs And Friends, and Anchored In Love: A Tribute to June Carter Cash. He recently co-wrote the song “The Middle Of Nowhere” with Tony Joe White on his album Rain Crow.

In 2007, Thornton and  J.D. Andrew formed The Boxmasters, to satisfy their craving for ‘60s beats. The Boxmasters have recorded an impressive and diverse catalogue of music that touches on their love of a wide array of influences.

As a touring band, The Boxmasters have cultivated a rabid cult fanbase across the United States and Canada. Opening for the likes of ZZ Top, Steve Miller, George Thorogood and Kid Rock The Boxmasters have proven to win over large audiences. As a headliner, frequent stops in Kansas City at “Knuckleheads”, Springfield, Illinois at “Boondocks” and “Merrimack Hall” in Huntsville, Alabama have shown dedicated yet still growing audiences. Two appearances at Levon Helm’s “Midnight Ramble” in Woodstock, New York were highlight performances for the band, as well as the “Ramble at The Ryman” that Levon hosted in 2008. The Boxmasters performed on “The Grand Ole Opry” in 2015, another in a growing resume of must-play venues.

During the shutdown of 2020, the recording studios in Los Angeles were closed for several months.  For avid creators Bud and J.D., this was a time to start planning and writing for the day that the studios would open again and what sort of new songs would emerge.  Over the course of the next year, The Boxmasters would record three new albums.  A very personal album called “Nothing Personal” which is yet to be released, “Christmas In California” which was released in November of 2021 and “Help…I’m Alive” which is to be released on April 15th on Keentone Records/ Thirty Tigers.

“It’s been difficult for people to live in this world for the past few years.  Normally you hear someone cry out ‘Help, I’m drowning’ or ‘Help, I’m dying’.  This song is a tongue-in-cheek way of saying, ‘Wow it sucks being here right now. Help…I’m Alive.’  Well, okay, it’s really not so tongue-in-cheek.  I came up with the chorus and melody just walking around the house during lockdown.  It just came out in that moment, just as it is on the record.  I picked up a guitar and Facetimed J.D.” recalls Bud about the creation of the title track on the album.

‍ “This album was really a cathartic release for us.  We were able to be in our favorite place in the world, which is the recording studio.  So we made a joyful noise.  Meanwhile there was a lot of pain and suffering and fighting all around us.  I lost one of my best friends from childhood who took his own life on one of the days that we were recording.  So there are those bits of sadness in these poppy and fun sounding songs” says J.D.  The “2022 Help…I’m Alive” Tour runs from April into June and makes stops in all areas of the United States.  Familiar stops in Kansas City at Knuckleheads, Atlanta, Annapolis, Oregon and California are joined with new venues in Texas, Wyoming, Ohio and Kentucky.  “We were having the best tour of our careers last summer before we had to stop due to the coronavirus.  So we are very excited to get back out there and in front of the fans” says J.D.  “We should have some new merchandise as well as a few new songs from both “Help…I’m Alive” as well as new songs that we’ve been writing in the last few months.”

A portion of all Armory Music Hall concert ticket proceeds go towards MUSICARES.

MusiCares helps the humans behind music because music gives so much to the world. Offering preventive, emergency, and recovery programs, MusiCares is a safety net supporting the health and welfare of the music community. Founded by the Recording Academy in 1989 as a U.S. based, independent 501(c)(3) charity, MusiCares safeguards the well-being of all music people through direct financial grant programs, networks of support resources, and tailored crisis relief efforts. For more information please visit: www.musicares.org